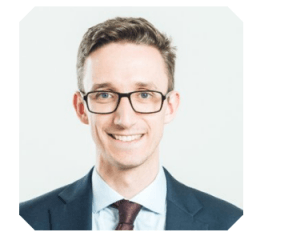 Tell us a bit about your job…

I am a Senior Researcher on the Brexit programme at the Institute for Government (IFG), a non-partisan think-tank in Westminster. The IFG aims to improve the effectiveness of government, rather than advocating particular policy outcomes.

In my job I research and write reports on different aspects of the Brexit process; comment on and react to political developments around Brexit, on the IFG website and in the media; and explain our views to interested people and organisations, including parliamentarians, UK civil servants, foreign governments, businesses and think-tanks. I also oversee the work of researchers on the Brexit team and manage two researchers on other IFG programmes.

I never had a clear plan for what I wanted to do after university – my career to date has been a series of lucky decisions based on what I thought sounded like interesting opportunities!

During my year abroad I worked for an NGO in Amman, Jordan. I worked with the head office to upgrade their policy for managing volunteers as well as teaching English in one of their community centres. My first summer after university I interned at the Overseas Development Institute, on an internship organised by Student Hubs.

That set me up to join the civil service on the grad scheme run by the Department for International Development (DFID), working on Middle Eastern issues. I enjoyed working on an issue related to my studies but after a while I was interested in getting more into the heart of government and particularly domestic policies. I moved to HM Treasury and worked in a number of roles including on climate policy and relations with EU member states. After the 2016 referendum I worked on the Brexit process until late 2017, when I moved to the IFG. 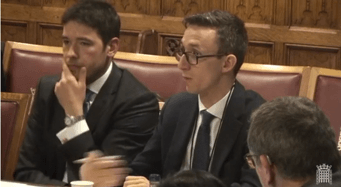 Tim giving evidence to a committee in the House of Lords

What do you enjoy most about your work?

I love the opportunity to talk to people from across the political spectrum, who represent all points of view, about whatever issue I’m researching. We work with civil servants, charities, academics, businesses, politicians, embassies and others to inform our work. This means I can really delve into a question to make sure I’m understanding it properly and can present a properly thought-through argument about changes the Government should make.

As well as the in-depth research, a big part of my role is about explaining that research to the wider world, whether that is politicians in Parliament or the general public via the media. I’m never bored as there’s always something new to do or someone else to talk to!

And finally, having worked for the Government and now working outside it but trying to influence what it does, I enjoy the freedom of not having to ‘toe the party line’. As a civil servant, you are a representative of the Government and have to work within certain political parameters; researching the Brexit process in a think-tank, I am free to set out my own thoughts (provided they’re based on evidence, of course!) This does mean I’m further from the political action, but it’s refreshing to have a new perspective.

What do you wish you’d known about working in policy when you were a student?

The world of “policy” can be vague – it is a catch-all term that can include political parties, the civil service, think-tanks, lobbyists, NGOs, and indeed media organisations trying to keep track of, and scrutinise, all of the above!

I tended to think that these were all separate career paths and that you had to commit to one and stick to it. But over the last five or six years working in and around government, I’ve met people who have moved between all these different types of organisations – and who are better at their jobs as a result.

In my own move, from the civil service to a think-tank, I brought knowledge of how decision-making inside government departments really works; since I joined IFG, I’ve been learning about how the wider policy world works and how to build a case for change outside government.

So I would say don’t worry too much about expecting to find one organisation and stay there for life!

It may seem obvious, but do your research! There are some well-known routes into public policy jobs – the civil service fast stream, individual government departments’ grad schemes (including the DFID one I joined) or working for a political party – but they are by no means the only ones.

Work out what issues or policy areas you’re interested in and look out organisations doing interesting things in that space. Get on Twitter and follow organisations and individuals – lots of job opportunities, including at entry level, pop up there all the time.

And use your time at university – having a year abroad allowed me to get a decent chunk of (unpaid) work experience under my belt. Not everyone has that chance of course, but getting involved in relevant societies and/or voluntary work around your studies allows you to demonstrate that your policy interests are genuine.

If you’d like to find out more about policy work inside UK government, head to our public sector webpage. You may also be interested in attending our Careers Panel on public policy on Wednesday 20 February 2019.